Although Eric Bielitz is primarily a tax attorney, his work with MVLS has involved so much more.  Since he began volunteering in 2014, Eric has taken 64 cases:  12 tax, 50 expungement, one bankruptcy bypass and one estate case.   As Chair of the Pro Bono Committee of the Tax Council of the MSBA, Eric led by example in his prolific pro bono work.  Although he has since stepped down as Chair, he continues to remain involved and is one of the first to volunteer for any tax-related project.

Recently, MVLS collaborated with the MSBA Tax Section and the Maryland Comptroller to offer a Tax Hotline available to recently furloughed federal employees, federal contractors, and low-income taxpayers.  Without being asked, Eric provided an informational handout which was the basis for the reference manual currently used by volunteers staffing the hotline.  In addition, Eric was a speaker for a webinar for Eastern shore providers of ESL and low-income services, as well as provided a reference manual for these providers. Eric’s pro bono work has come in many forms, and the LITC program is grateful for all that he does.

MVLS is an opportunity to use my education, experience, and talent to give back to the community, and to make a real difference in someone’s life.

I graduated from college after the dot-com/9-11 bubble burst. It was eye-opening to me that, even with all my advantages, how difficult it was to get a stable job and get by.  The thought of facing the world not only without those advantages, but the disadvantage of an impossible tax debt or an old arrest is terrifying.

In short, I recognize my privilege, and MVLS lets me put that privilege to work for those without, so they may find their way in the world just a little bit easier.

Nearly all my cases are tax or expungement.

I was brought in at literally the last minute on a U.S. Tax Court case – the IRS had filed a motion to dismiss for lack of prosecution and my client was facing a $175,000 federal income tax bill that would put him, his family, and his small business in ruin.  I got the trial postponed settling the case for a little over $7,000.

There was one expungement case where the arrest was on an out-of-state warrant (aka “fugitive from justice”).  It was not clear if “fugitive from justice” was a “crime” for the purposes of Section 10-105 of the Criminal Procedure Article, and there was (and still is not) any appellate decisions on the question.   It really forced me to be creative and bold in my advocacy.

The clients.  Just talking to them, being on their side, you can almost see the weight lifting off their shoulders.  When things work out for the client, their joy is palpable.  Even when it doesn’t go their way in the end, they take comfort in having had a fair shake.

Absolute best was an expungement client who, as a thank you, sent me a picture of Bill Murray captioned “You’re Awesome!”

To make our state a better place, if only just for one other person. 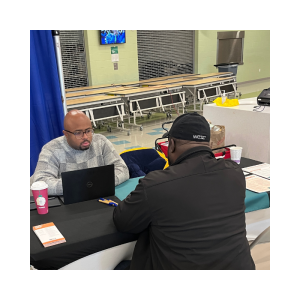